A recipe for decent work

The key to solving the global problem of income inequality will be to improve employment opportunities and ensure fairer rates of pay. How can this be achieved? 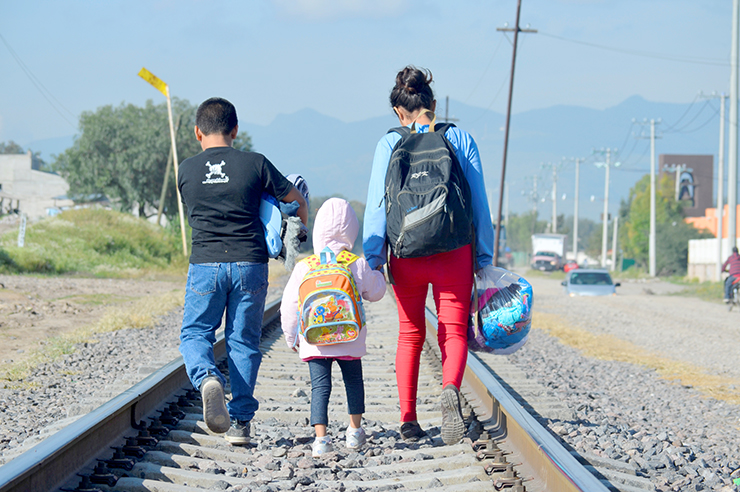 Tultitlán, Mexico. Three children from Honduras travel north, hoping to cross the border to the United States to reunite with their family. Migrants seeking decent jobs are dangerously exposed to exploitation and abuse.
© Ojeda/UNICEF

A recipe for decent work

The key to solving the global problem of income inequality will be to improve employment opportunities and ensure fairer rates of pay. How can this be achieved?

The global workforce is in trouble. Fear and xenophobia have become even more prevalent in recent times as working people and their families struggle to live on their wages – or, worse, are marginalised by unemployment or insecure work.

The International Trade Union Confederation’s May 2016 poll on wages across a group of countries that represent 55 per cent of global GDP makes for sober reading. It tells us that 45 per cent of the world’s people are living on the edge, and 52 per cent are just getting by. This is a social and economic disaster. The overwhelming majority of these people have no buffer for the future, even if they get by day by day.

Global supply chains are now the dominant source of wealth in the economy. Yet they depend on a hidden workforce (those not in a direct employment relationship) that makes up to 94 per cent of those working along the chain – a workforce for whom multinational enterprises take little or no responsibility.

Companies know that this is a model for low wages, and for insecure and often unsafe work. They also know that, increasingly, informal work and modern slavery are aspects of harvesting and production processes. This is inequality by design. People know it and resent it.

A significant share of households in industrialised countries have experienced flat or falling real incomes for a decade or longer, with serious intergenerational effects. The gap between men’s and women’s average income is not shrinking – neither is the level of youth unemployment, nor the share of youth not in education, employment or training.

These factors have combined to raise the real prospect of ‘secular stagnation’ – a condition of negligible economic growth. They have also contributed to a popular backlash against governments, institutions and the very functioning of economic systems.

The Brexit vote, the US election results and the tenor of ongoing election campaigns in Europe reveal a major crisis of trust. These trends are reflected differently across regions, age groups and genders, and are not universally evident in all countries. They are triggered by different issues: slow growth and stagnant median wages, rising inequality and persistent unemployment. The common feature is that significant segments of populations feel that while others have gained despite an economic slowdown, they have lost out. They feel more insecure about their future. The claim that ‘elites are out of touch’ has struck a chord.

Inequality trend
In the industrialised economies over three decades, the proportion of national income generated by labour (as opposed to capital) declined by 10 percentage points of GDP on average. Income inequality increased within the wage share in 22 out of the 25 Organisation for Economic Co-operation and Development (OECD) countries with comparable statistics.

Between 2008 and 2011 market income inequality increased as much as it had in the previous 10 years. Latest OECD work on high-end incomes and taxation shows that across all countries it is the ‘very top of the income distribution’ that have benefited the most. The trend has been most extreme in the US, where the bottom 60 per cent of the population did not see any increase in their living standards over the past 25 years. The top one per cent, on the other hand, increased its share of total income from 13 per cent in 1990 to 18 per cent in 2014.

Reform needed
In the short term, inequality is stifling recovery. In the medium term, it is fuelling public mistrust and creating the conditions for rising populism across economies. In the longer term, inequality will result in rising skills gaps, increased unemployment and fears for survival as incomes stagnate or decline. This generates an anxiety that further mitigates against a smooth transition to a digitalised, globalised economy.

But with political will, we can achieve real reform. The UN Sustainable Development Goals (SDGs) – in particular SDG 1 (on eliminating poverty), SDG 5 (on gender equality), SDG 4 (on education), SDG 8 (on employment and decent work) and SDG 10 (on social protection) – can make a difference. The G20 summit in July in Germany can lead this work by resetting the parameters for rights, the rule of law, social protection, wage mechanisms and, consequently, shared prosperity.

Specifically, the G20 must commit to:

Implementation of the Paris Agreement on climate change affords more opportunities for green jobs with a commitment to a “just transition of the workforce”. National action, through dialogue with social partners on industrial transformation and support for the creation of a “just transition fund for workers and communities”, are vital elements to ensure progress towards a zero-carbon economy.

We also need urgent action to ensure decent jobs in the digital economy and for the next wave of digitalisation.

The recipe for decent work is simple: social protection, a minimum living wage, freedom of association and collective bargaining, and safe and secure work. This will only be realised if corporations are held to account. These policies and politics can reform market capitalism to make economies work for the advancement of both social justice and economic efficiency.

The promise of the SDGs and the Paris Agreement is a zero-carbon, zero-poverty world. Both business and workers will benefit if governments find the necessary political courage to make this promise a reality.