A new economy for all

With levels of inequality rising across the world, we need a new approach for people and planet 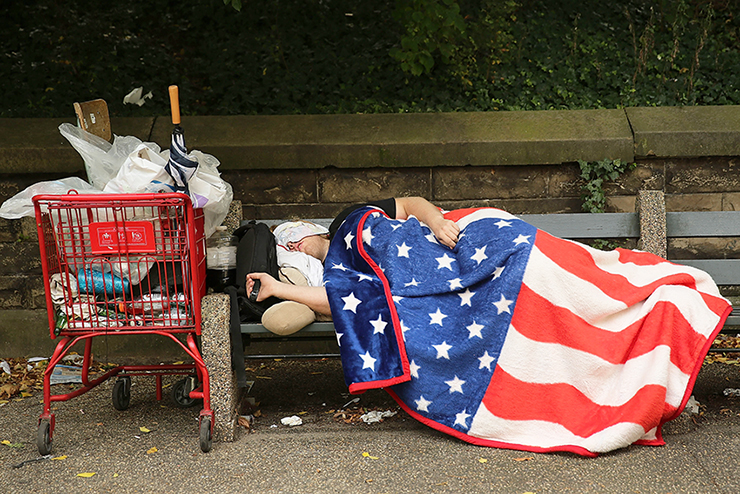 A homeless man in Brooklyn, New York. Income inequality has been getting more extreme over the last decade. In the US, 81 per cent of the population is in an income bracket which experienced flat or declining income over this period. © Spencer Platt/Getty Images

A new economy for all

With levels of inequality rising across the world, we need a new approach for people and planet

The Sustainable Development Goals (SDGs) speak to an agenda that is familiar the world over, even though different terms might be used to describe the key ideas: quality of life, flourishing for all people and sustainability for the planet. These ideas are increasingly coalescing around the notion of wellbeing, in all its dimensions.

This shared vision for a better way of doing things can be found across a range of sources. It is embedded in the scripts of many religions. It is contained in the world views of First Nations communities. It can be read in the scholarship of development experts and in research findings about what makes people content. This vision echoes in evidence from psychology about human needs and from neuroscience about what makes our brains react. Perhaps most importantly, it can be heard loud and clear in deliberative conversations with people all over the world about what really matters to them. It is set out in the 17 SDGs, and perhaps is best captured by the overriding mantra of ‘leave no one behind’.

An economy that leaves people behind
This is a call to ensure that everyone is included, that no one is marginalised. ‘Leave no one behind’ implies that it is the system, our collective institutions and their interactions, which does the ‘leaving’ – not that it is those left behind who are to blame. Taking this system-wide viewpoint enables a conversation about the interconnected nature of people’s opportunities and conceptualisations of development, how they interact with the environment, and how shifts in one sphere have consequences in the other. In the worst-case scenario, these interactions can spark spirals that devastate lives, threaten human rights and undermine peace.

The systemic nature of these processes means that it is inadequate to keep plastering over “wounds caused by inequality by building more prisons, hiring more police and prescribing more drugs” (as Danny Dorling puts it in his book Injustice: Why Social Inequality Still Persists). Expenditure on such items is a grave testament to the failure to help people flourish and enjoy quality of life. This tally is even higher when one looks at the expenditure necessitated by environmental breakdown – cleaning up after climate-change-induced flooding or storms, treating asthma exacerbated by toxic particles in the air, and buying bottled water when rivers and streams are polluted.

Of course, such expenditures are the preserve of those fortunate enough to have the resources to spend. Environmental breakdown hits those without such resources the hardest due to their increased vulnerability. People’s ability to escape from sources of toxicity and risk is determined by whether they can command access to uncontaminated, safer land and food sources, or if they are among the great numbers of those who must make do with what is left.

The vulnerability of those who are least to blame reflects the unequal distribution of power, resources and opportunity: economic resources are as unequally shared as the impact resulting from plunder of natural ones.

An unequally shared harvest
One of the best-regarded authorities on economic inequality is the World Inequality Report. The 2018 publication revealed that in recent decades income inequality, measured by the top 10 per cent’s share of income, is getting worse in almost all parts of the world. Statistics compiled by Credit Suisse show that the richest one per cent own as much wealth as the rest of the world. The gap between the real incomes of people in the Global North compared to those in the Global South has expanded by approximately three times since 1960. Taking the broader definition of poverty adopted by Peter Edward’s ‘ethical poverty line’ (identifying the income threshold below which life expectancy rapidly falls, currently $7.40 a day) as many as 4.3 billion people live in poverty.

Those GDP-rich economies that most epitomise the current economic model provide some of the starkest evidence that the prevailing system distributes inadequately. The McKinsey Global Institute reports that 81 per cent of the US population is in an income bracket which experienced flat or declining income over the last decade. The figure is 97 per cent in Italy, 70 per cent in Britain and 63 per cent in France. People living in GDP-rich countries are struggling to get by. In the UK, for example, the use of food banks has risen dramatically in recent years.

Those who reap most of the rewards of this system are also those putting the planet in most danger. On climate change, figures published by Our World In Data show that the richest countries (high and upper–middle income countries) emit 86 per cent of global CO2 emissions. In the UK, emissions are strongly correlated with income, while in the US, the richest 10 per cent have a carbon footprint three times that of people in the poorest 10 per cent of incomes.

Rebuilding the system
It is not unusual to hear people who are concerned about the state of the world pointing to the levels of inequality. They cite the lack of sufficient job quality, bemoan the plunder of the planet and declare that the economic system is ‘broken’.

But if one peers beneath the symptoms, it becomes apparent that the root cause of so much of this is directly due to how the economy is currently and proactively designed. Our economic system does not sufficiently account for nature, is blind to distribution of resources, and elevates measures of progress that encompass perverse incentives (such as short-term profit and GDP at the expense of human wellbeing).

The system is not broken: it is doing what it was set up to do. The roots of inequality and environmental breakdown are found in a heady mix of institutions, processes and power relations that shape allocation of risk and reward. Decisions taken over many years by successive governments have resulted in: inadequate minimum wage levels and inadequate social protection; different rates of tax on income compared to capital; relatively low rates of top income tax (particularly in the UK and US compared to other OECD countries, and compared to previous levels); loopholes inserted in legislation that enabled tax avoidance; undermining of unions’ scope to collectively bargain and fight for workers’ pay and conditions; narrow ownership of many firms; and corporate governance that fixates on short-term profit.

The same system dynamics are seen in the links between inequality and environmental impact. These links arise through: the pressure to consume status items to maintain the appearance of wealth; the consumption patterns of the richest; the way inequality undermines collective efforts to protect environmental commons; and the break that inequality exerts on pro-environmental policies. These structures are deliberate, even though the side effects may not be. Although they stretch back many decades (centuries even), they can be dismantled and designed differently.

Building a wellbeing economy
The patterns highlighted above suggest that while the vision might be to leave no one behind, today’s reality is that some might be too far ahead – hoarding economic resources and doing much damage to natural ones. This arrangement is a construct that reflects political decisions and choices by enterprises.

A wellbeing economy is one that is regenerative, that is cooperative and collaborative, and that is purposeful. It will have equal opportunity at its core: not simply by meekly redistributing as best one can the outcomes from an unequal economic system, but by structuring the economy so that better sharing of resources, wealth and power is built in. For example, it would entail:

A growing movement is forming around the idea of such an economy. It comprises academics laying out the evidence base, businesses harnessing commercial activities to deliver on social and environmental goals, and communities working together not for monetary reward, but following the innate human instincts to be together, to cooperate and collaborate. Such efforts will be made so much easier as pioneering policymakers are emboldened to step away from the constraints imposed by a 20th century vision of ‘development as GDP’. Instead, they must embrace a new agenda for the 21st century – an economy geared up to deliver human and ecological wellbeing. This work bodes well for the creation of a world in which no one is left behind.