With progress on achieving equal gender rights frustratingly slow, women and girls worldwide are mobilising to pressure governments to do more. What will it take to create a world where gender inequality is a thing of the past? 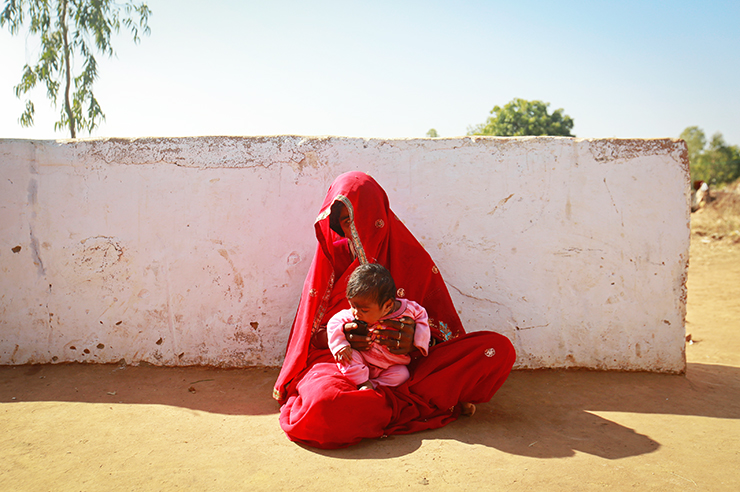 A mother, 14, with her four-month-old baby in Rajasthan, India. She was married to her husband when she was 11 and he was 13. The legal age for marriage in India is 18 but marriages like these  are common, especially in poor, rural areas . © Danish Siddiqui/Reuters

With progress on achieving equal gender rights frustratingly slow, women and girls worldwide are mobilising to pressure governments to do more. What will it take to create a world where gender inequality is a thing of the past?

Across the world, women’s voices are growing in strength and unity. In marches and demonstrations in places such as Poland, Bolivia and Uruguay, in cities like Cape Town, London and Washington DC – women have been taking to the streets in increasing numbers. Sometimes they are on their own, other times supported by families, communities, friends and neighbours. They are standing up and calling out to protect their rights, and the gains made to date.

In these events, as they vote with their feet, women are calling for what we have promised in the 2030 Agenda for Sustainable Development, and especially in Goal 5 (on gender equality and the empowerment of women and girls).

Their calls reconfirm the essential need for: universal access to sexual and reproductive health and reproductive rights; full and effective participation and equal opportunities for women’s leadership in work and in politics; the end of all forms of discrimination; and the end of violence against women, holding perpetrators accountable.

This is what the 2030 Agenda and the Sustainable Development Goals (SDGs) have given us – a shared aim for our global community that puts in motion the demands of the women and girls of the world. It joins a resounding global gender equality compact that has accumulated over the last two years through the ‘Beijing+20’ review on progress 20 years on from the Beijing Declaration and Platform for Action, the Paris Agreement on climate change, the New Urban Agenda and the New York Declaration for Refugees and Migrants.

These agreements all have in common the recognition that progress on gender rights will impact whether or not we can reach all 17 SDGs. With its strong interlinkages throughout the goals, the 2030 Agenda is our key to tackling today’s complex global challenges, such as economic stagnation, political instability, deep inequalities, increased environmental degradation and a record number of refugees and migrants. Gender rights are at the core of sustainable development.

Driving grassroots and youth engagement
The SDGs are intended to benefit everyone. They are also everyone’s responsibility. They need ownership and engagement at all levels of society, and with all actors. With the end point set 13 years away, it is the young people of today who are the true Agenda 2030 generation. Right now, more than half the world’s population is under 30, and that figure is projected to rise to 75 per cent over the next decade. These young people are already demonstrating their urgency to deliver on the commitments made in the SDGs and their call to leave no one behind.

Candice Mbaita is an example of that fruitful impatience. A female innovator from Bulawayo, Zimbabwe who participated in the Building Bridges Foundation’s Road to Nairobi 2016 project and the UN SDG Action Campaign, she is bringing healthcare to patients in rural and remote areas who otherwise would not be able to make the long and difficult journey to a hospital.

Candice’s work as a woman entrepreneur in the health sector ties together Goal 5 (gender equality) with Goal 3 (good health and wellbeing) and Goal 10 (reduced inequalities).

Another inspiring example is Rosario del Pilar Diaz Garavito, one of the young founders of the Millennials Movement in Peru. The movement reaches out to broad groups of citizens in public spaces like parks, squares and markets, and invites them to get engaged with the Global Goals through thinking about which ones are most important for their community. Focused on gender equality, Goal 16 (peace and justice) and Goal 17 (partnerships), the movement’s 2030 Agenda Ambassadors Programme supports SDG implementation through workshops, trainings and sustained local engagement.

Taking the SDGs from a distant concept to something that people realise is critical to their own lives, families and local communities is vital to effective implementation and to holding nations accountable. It is essential that we continue to raise awareness about the SDGs at a grassroots level and ensure that, globally, people both young and old feel that these are their goals. It is with this level of engagement and involvement that we will see real progress.

Data and accountability
Progress also requires effective ways to measure and monitor our results. Without access to quality, comparable and regularly collected data, effective policies cannot be designed or implemented, and progress cannot be adequately measured. Agenda 2030 puts new pressure on governments to rectify the paucity of global data and statistics relating to women and girls, to strengthen member states’ statistical systems and to improve coordination on methodologies.

There are vast gaps in data for some of the issues that have the most impact on girls’ lives and safety. For example, incidences of violence against women and girls often go unrecorded, and countries have different approaches to gathering data. This lack of clarity makes it harder to compare numbers globally, detect trends and put in place the most effective interventions. Although data gaps may sound academic, it is literally an issue where lives are at stake.

The Inter-agency and Expert Group on SDG Indicators (IAEG-SDGs) has been tasked with creating the indicators that governments use to evaluate progress in achieving the SDGs. It has developed a global framework of 230 indicators, 53 of which are related to gender. An important feature of the global indicator framework is the overall demand for data disaggregation and the coverage of marginalised groups, to leave no one behind.

National averages mask inequalities in outcomes, obscuring the experience of the most vulnerable and those with least voice – often those facing multiple forms of discrimination – and very often women and girls from poor and rural households. Good data allows us to hone in with much more specificity on those who most need support – speaking for those who would not otherwise attract attention.

UN Women’s new flagship programme initiative ‘Making every woman and girl count’ will, over the next five years, aim to increase the production and use of gender data to support member states in their efforts to implement and monitor the gender-related SDGs. With the backing of partners like the Bill & Melinda Gates Foundation, the aim is to mobilise a wide spectrum of groups with an interest in getting better data faster and putting it into action.

Governments, including national statistical offices, regional commissions, international agencies, private foundations, civil-society organisations and academic institutions are all part of this effort to make sure that the numbers inform policies and increase accountability at all levels.

Financing gender equality
Even when it is clear where our efforts should be directed, financing for gender equality remains a struggle. As outlined in UN Women’s Handbook on Costing Gender Equality, there is a persistent funding gap – of up to 90 per cent – for programmes that would lead to gender equality and women’s empowerment.

Areas of sexual and reproductive health and rights; peace and security; and ending violence against women and girls all remain underfunded in comparison with governments’ stated commitments. Yet we know that investing in gender equality would directly contribute to a number of SDGs, including Goal 5 (empowering women), Goal 1 (ending poverty), Goal 2 (reducing hunger), Goal 3 (supporting health) and Goal 10 (reducing inequality), among many others.

While governments can prioritise funding for gender equality in their public spending, donors, the UN and other partners play an important role in supporting these efforts. Such spending needs to be monitored to ensure it is responsive to women’s needs and meets  its goals.

Taking forward a more assertive approach
An assertive approach to gender rights is an accountable approach, where commitments are followed up with action, adequate financing and rigorous monitoring. We need a global multi-stakeholder coalition to bring key actors together in collaboration, with innovation and the means to ensure that promises made are promises kept.

Empowering women and girls goes hand in hand with global sustainability. The more assertive our approach, the faster we will achieve our goals and therefore the greater likelihood that we will create an inclusive and sustainable world for the next generation.