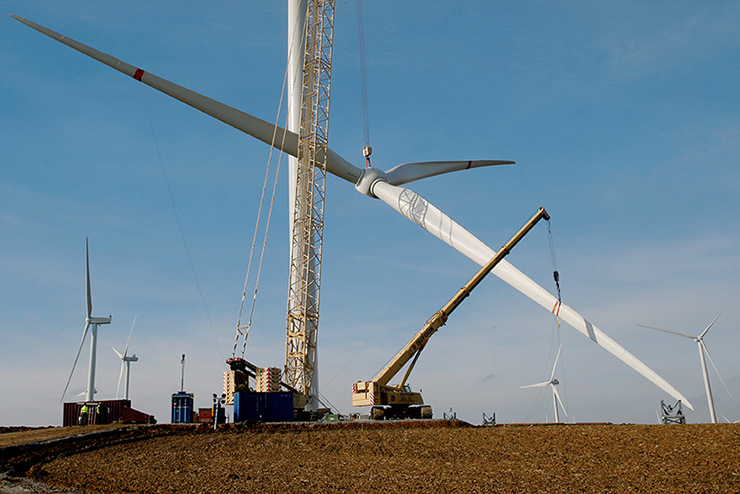 Erecting a windmill turbine in Graincourt-lès-Havrincourt, France. The attempts at green stimulus during the 2008-2009 recession indicate there is a minimum scale and duration needed to yield a lasting benefit: a Green New Deal would require a five-year plan and spending of around five per cent of GDP. © Pascal Rossignol/Reuters

One of the surprise policy developments in the United States has been the revival of the concept of the ‘Green New Deal’. Representative Alexandria Ocasio-Cortez and Senator Edward Markey have introduced a resolution in Congress calling for such a Green New Deal for the US. It asks for massive government spending over the next 10 years to shift the US economy away from polluting industries, embrace green infrastructure and produce 100 per cent of energy from renewables. In the process, the Green New Deal aims to create jobs and boost the economy.

Although lacking in specifics, the core objective of the Green New Deal is clear. The US government should invest heavily over the next decade in cutting carbon emissions across the economy, from electricity generation to transportation to agriculture.

If designed correctly, such a plan for decarbonising the American economy could play a significant role in achieving several Sustainable Development Goals (SDGs), including affordable clean energy (SDG 7), inclusive and sustainable growth (SDG 8), resilient infrastructure and green innovation (SDG 9), and more sustainable patterns of consumption and production (SDG 12). Above all, a workable Green New Deal is a blueprint for achieving urgent action to combat climate change and its impacts (SDG 13), for the United States and many other economies.

To be successful, any Green New Deal needs to draw on the lessons from past efforts to ‘green’ economies.

Spending plans
A good place to start are the various green stimulus plans enacted by major economies during the 2008–09 Great Recession. During that turbulent time, I was asked by the UN Environment Programme to construct a Global Green New Deal: a plan to rethink the world’s economic recovery. My UNEP report was published in 2010 by Cambridge University Press as A Global Green New Deal: Rethinking the Economic Recovery. It included a comprehensive review of green stimulus plans, examining what worked and what did not in terms of lasting efforts to green economies. I believe that this review offers several important lessons for any decarbonising strategy.

For starters, it is important to be realistic. Rather than setting an arbitrary target such as going 100 per cent renewable – which would take decades – a Green New Deal should be built on three critical objectives:

For example, during the 2008–09 recession, major economies spent typically between one and two per cent of their gross domestic product (GDP) on green stimulus. More than 60 per cent of the stimulus went to improving energy efficiency, with an aim to create much-needed jobs in hard-hit sectors such as construction. Clean energy did receive a boost, especially in Asian economies and the US, but there was no lasting impact on reducing greenhouse gas emissions globally.

In contrast, to be effective in promoting low-carbon and green growth, a Green New Deal requires a five-year plan of public spending totaling around five per cent of GDP. For the US, based on 2017 US GDP (purchasing power parity) of $19.4 trillion, this amounts to a down payment of $970 billion.

Second, public support and investments may also be critical for other bottlenecks to green growth. These include: developing ‘smart’ electrical grid transmission to integrate renewables; combining municipal planning and transport policies to foster more sustainable cities; and investing in mass transit systems, both within urban areas and in new major transport networks.

Pricing reforms
But spending alone will not decarbonise the economy. There is a need for complementary pricing reforms to transition to clean energy, such as phasing out fossil-fuel subsidies and taxing carbon.

Implementing these reforms will provide the incentives for long-term investments in low-carbon energy and for reducing dependence on fossil fuels. The drop in emissions accompanying any tax on carbon would also reduce the price tag of any Green New Deal, as it would speed up the transition to a greener economy.

Because such policies will save or raise revenues, these funds can help finance key government-led investments for the green transition. This could go a long way towards paying for a Green New Deal. For example, Resource for the Future calculates that, for the United States, a $20 tax per tonne of carbon could reduce US emissions by 11.1 billion tonnes between now and 2030. It could also raise $970 billion – the amount needed for a five-year Green New Deal for the United States.

The revenues raised could also be allocated to other spending priorities for a successful transition. They could be used to raise the minimum wage, provide payments or retraining for displaced workers, and reduce burdens for vulnerable households affected by the green transition.

Network effect
There is good news, too, on the costs of promoting clean energy. The high costs today of reducing carbon emissions through some low-carbon technologies could fall quickly if the right policy is adopted. In particular, expenditures targeted at clean energy research and development will lead to lower costs and wider adoption, as the technology becomes more familiar, innovation spreads, and production scales up. The rapid fall in solar panel costs and their widespread installation is one example of this effect occurring.

There is also a network – or ‘chicken and egg’ – effect, where increasing demand for a clean-energy technology or product fosters related innovations that lower cost. For example, purchases of electric vehicles will stimulate demand for charging stations, which once installed will reduce the costs of running electric vehicles and further boost demand. This suggests that subsidies for purchasing electric vehicles or public investment to spread charging stations can kick-start this network effect, but can be safely phased out once the effect takes hold.

Urgent action on climate change and attaining other critical SDGs may require a ‘green push’. If designed correctly, and if accompanied by the right price reforms and incentives, the Green New Deal could be that impetus. The type of policies and investments adopted, and the decision as to how to pay for them, could ultimately determine the success of any Green New Deal.