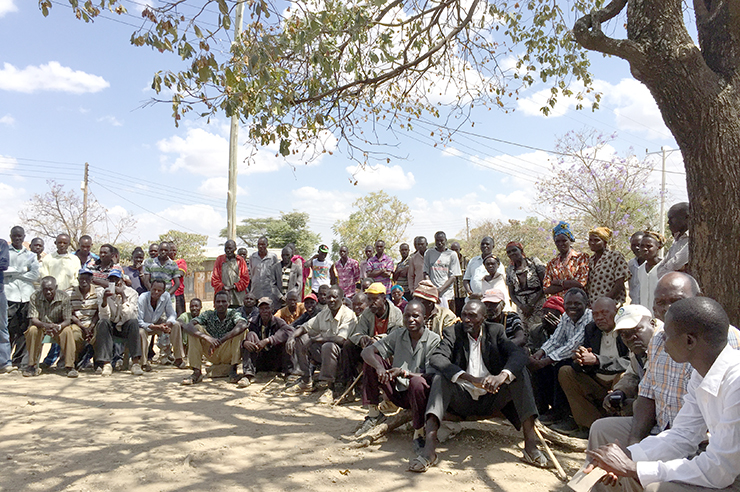 Discussing projects for the SDGs at a baraza (village meeting) in Baringo County, Kenya. © Richard Jolly

The Sustainable Development Goals (SDGs) require local action – not merely to make them practical and to help them get implemented, but also to set priorities and mobilise support. This is a key step in adapting the 17 goals, 169 targets and 232 indicators to the local context, and making them realistic. Here are two examples I witnessed recently – both of which show what can be achieved.

I came across the first in January 2018, when I was visiting Baringo County in Kenya, where I had worked in community development some 60 years earlier. I had returned not only to look back, but also to find out what was going on in Baringo today. I wanted to see what development was underway in one of the more underdeveloped districts of the country, where I had been so long ago, in the dying days of the colonial era. (I was a conscientious objector to military service and was sent to work in Kenya as alternative service.)

My hosts and guides in Baringo this time round were the Sambili family. I stayed in their home in Molo on the southern reaches of Baringo, about 150 miles north of Nairobi. The first stop on our visit was planned as a courtesy call on the county governor, a new and elected position. Under the old colonial system, this would have been the district commissioner. Today, development is a high priority for the local leader, a far cry from his predecessors’ focus on law and order back in the 1950s.

The governor was holding a meeting but made time to see us. He explained what the meeting was about, and by happy coincidence it was the SDGs. What was intended as a mere formality became a substantive discussion. He explained: “We have a draft outline for the county, with its population of about 550,000. But during February we need to get specific proposals from each of the wards, about 30 in all.”

Within the broad priority for poverty reduction and sustainability, there were needs for action on safe water, more health clinics, reforestation and improvements in roads. Coverage of primary education was fairly good, except among the Pokot people in the North. Many Pokot parents were still reluctant to send their girls, and even some of their sons, to school. There were needs also for better data: for monitoring progress as well as for understanding the basic situation.

Committed as I have been to the SDGs and their predecessors, the Millennium Development Goals, I nearly fell off my chair in excitement and admiration for this modern grassroots example, linked to the ‘Global Goals’ of the UN today. Just 60 years ago, there had been widespread illiteracy here, primary schools only, grossly inadequate health services and people visibly ageing in their thirties and forties.

Village meeting
There were other surprises. Driving up the road to Kabarnet, the county capital where I had lived for two years, we came across a baraza – a village meeting – being held under a tree near the roadside.

I remembered barazas from my time in Kenya long ago. Back then, they were mostly held by colonial officials, were attended by men and were hardly participatory. This one, by contrast, was being chaired by the elected mayor, supported by a bishop, and had about 130 men and women in attendance, mostly sitting on benches. We stopped to find out more and were told the topic was choosing specific projects for the SDGs in their location. The mayor explained: “We are first making a list of all the suggestions for projects, then we will consult on priorities before sending them to the governor.”

A bit further along the road, we stopped and walked down a stony path for a couple of hundred yards, to a little stream. Hellen Sambili, an MP and university teacher with a doctorate from Lancaster University, explained the significance. “This is where I grew up. Our house was 200 yards further up the hill. When I was in primary school, I would get up each morning at 5am, fetch water, tend to the animals, and at 7am walk eight kilometres to the school. When I got back after school, I would do other household chores. If the animals were grazing, I would often sit, reading a book while looking after them.”

Here, in the life of one exceptionally talented individual, was the development trajectory of Baringo – built on education, talent, hard work, initiative and persistence. After being elected as an MP for Baringo, Hellen used her position to create new opportunities within the community. She gathered the funding to build a secondary school for girls in the very place where she went to primary school. The school now has 655 pupils.

Closer to home
I returned to the UK a little tired but also elated and enthused. The next day, I walked down the road in Lewes, East Sussex, and bumped into an old friend who had played a major part in establishing the ‘Lewes Pound’. This is our local currency, useful for buying goods in neighbourhood shops and thus encouraging local trade.

“I want to have a meeting to discuss what the SDGs might mean for Lewes,” he explained. “Will you come?” A further surprise – and, of course, an offer I could not refuse. We had the meeting in early February, and recognised that it was merely the first of what would need to become a process. We are collecting data, contacting some elected officials and exploring other possibilities. We have already made some decisions.

While we expressed interests in all the goals, we decided to focus on three issues to start with:

An initial aim is to request the data that relates to these concerns in Lewes, mindful of the gaps in data for the groups that are, or feel, excluded. By working within the SDG framework, we intend to highlight both what we are doing well and where Lewes has issues to tackle.

We hope to develop a ‘toolkit’ of information and a platform with which to engage others. We also want to explore links with Transition Town Lewes, a group that is already active on environmental sustainability, supporting initiatives such as ‘Plastic Free Lewes’.

Both these experiences – in Baringo and East Sussex – have charged me with new thinking and new commitments.